In this post we’ll see how to have Cucumber tests running in IntelliJ and command line using SBT.

Adding Cucumber to the project and how to configure SBT multi-module won’t be covered this time as these topics are well covered elsewhere.

Executing Cucumber tests from IntelliJ is necessary to help during development as you just want to start your application and run the Cucumber tests right from the IDE.

This post is based on a multi-module SBT project. The separation in this architecture allows running functional tests against the same application deliverable that will be eventually running in production. The module discussed in this post is rhAcceptance:

Before choosing to go with the fat jar approach, I tried to configure the test to execute from its natural location PROJECT_ROOT/rhAcceptance/src/test. Having Googled it quite extensively it seems only “Scalatests” are found by default in SBT.

Cucumber test was in the scope but it never ran

There are a couple of third-party plugins that enable Cucumber tests to be run as part of sbt test goal. I haven’t used them as I am wary of depending on third-party plugins with few contributors and, in this case, it was cheap to solve the problem in the way described below.

The alternative solution was to move the tests PROJECT_ROOT/rhAcceptance/src/main directory and run it as a fat jar.

In the acceptance test module, Cucumber tests and feature files have bee moved to the ‘main’ directory instead of ‘test’

In order to get the build.sbt creating a fat jar, I used the assembly plugin. Note that assembly.sbt goes into the SBT project directory.

Below the SBT configuration in rhAcceptance module that create a fat jar named acceptance.jar

For the set up above, just run sbt assembly and the fat jar will be created inPROJECT_ROOT/rhAcceptance/target/scala-2.12.

Run the above main with the following configuration:

The message “Test framework quit unexpectedly” may sound like the test run failed, but we can see that they were run successfully.

Note that --glue must point to the root package where your step definitions are located.

The last argument classpath:uk.co.myproject is the location of your feature files, classpath is necessary to load the feature files from inside the jar.

Here now we have the same tests run successfully from IntelliJ and the command line.

Depending on the number of environments in which you have monitoring enabled for, it may be cumbersome to keep all your Grafana dashboards synchronised across environments when changes occur.

In this article I would like to show a Docker image I created to keep Grafana dashboards in sync across environments.

What is in the image

How to use it

I can’t tell if I have tried to reinvent the wheel with this image. But, the is fact that I couldn’t find anything already automating Grafana dashboards in the same way.

As I mentioned above, this is currently my favourite solution and if I learn a better way of doing it, I’ll update this article.

Before we start, make sure you have already created a key-pair (a *.pem file) that allows admin access to AWS.

This is not a detailed guide for the deployment, so it’s assumed understanding of the concepts of ECS, Docker and Pipelines.

This is the only manual step necessary. But it has to be done only once.

The Load Balancer will provide a single URL to reach the cluster where container can be added or removed. 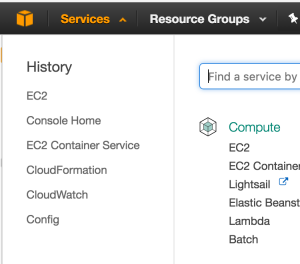 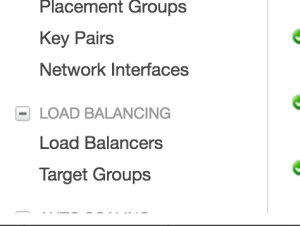 All containers deployed under this Load Balancer will be associated directly with this Target Group.

Fill in this form below. The important thing to note here is the Health check settings section: you must make sure the path you add to your health check actually exists, otherwise your container will be considered unhealthy and ECS will kill it and re-run forever.

Skip the 2nd step on the wizard

On the 3rd step, select the default security group.

Go to the end of the wizard and confirm/save the new Load Balancer.

The address to access the application is under DNS name.

The docker-compose.yml referred to in the .gitlab-ci.yml below

The environment variables seen below can be added on Settings => CI.

… and by clicking on the pipeline the console should show the logs. The example below is the CI_deploy logs.

Back to AWS – ECS

Notice the request is distributed evenly across the available containers in the cluster (in this case 2) by hitting the  Load Balancer URL several times.

This post is about running the Vaadin 8 Hello World with Scala 2.12 and Jetty.

Following my frustrated attempt to Dockerise an Ionic 3 application for web browser, I went back to Vaadin in order to get a UI quickly working for my Akka project.
I found the following Vaadin+Scala documentation which is a good start but it doesn’t show how to actually run it using the Maven Jetty plugin.

Execute the Maven archetype below to get a Hello World app:

Now add the Scala dependencies to your pom.xml:

Q.: Why is the screen of my Android app reset when I rotate the device from Portrait to Landscape, and vice versa?

A.: The rotation of the device is seen by Android as a configuration change which causes the current activity (including any instance variables) to be destroyed. Android then invokes onCreate(Bundle savedInstanceState) for this new configuration which resets your application to its initial state.

Q.: How can I keep the state of my app when the device is rotated?

A.: Override the method onSaveInstanceState(Bundle savedInstanceState) in your activity class and add key/value to save the state you want to get back. For example:

Then simply restore the values saved in onCreate(Bundle savedInstanceState). For example:

Following Powa’s bankruptcy, I found myself having to, rather unexpectedly, search for a new job.

Here I would like to share a few thoughts regarding one of the stages of the recruitment process that I am against: the pairing session.

It’s understandable that an organisation hiring a new developer must separate the wheat from the chaff, especially in a city like London where there are quite a few developers to choose from.

The typical stages in the hiring process that software developers go through are:

In my opinion, the importance of stage #5 in this process is overrated by employers.

The “pairing” exercises I have been through were hardly any kind of partnership. Out of the 12 sessions I attended in 2.5 weeks, only 2 bore any similarity to a partnership.

The overwhelming majority of the sessions turned out to be nothing more than your pairing partner acting like a sheriff watching over your shoulder and reminding you of the time remaining for your session to end.

The scope of these kind of exercise ranges from small greenfield to pieces of legacy code that can touch anything from simple data structures to reasonably complex concurrency issues, therefore, you never know what to expect from these sessions.

I feel uncomfortable with the pairing stage (other developers, who I had casual conversations about the subject, feel the same way) and fail to see the real benefit of this kind of exercise.

The major issues I had to deal with during pairing exercises were:

The bottom line is that I normally underperform in recruitment pairing sessions.

Discussions about the unattended coding exercise would probably suffice.

It was no coincidence that I succeeded in 100% of the unattended exercises but failed most of the “pairing” sessions.

I think the unattended coding assignment reflects more realistically the coding skills of a candidate as he/she can develop in his/her comfort zone:

No pairing at Powa

In a nutshell, these were the steps we used to hire new developers at Powa:

We hired some of the finest developers in London without resorting to pairing.

I haven’t yet seen any organisation which simply throws a new joiner in a team and expects him/her to start coding immediately. There is a period to allow the new joiner to get familiarised with the new team, the work, the office facilities etc.

The pairing sessions are not in-line with reality since it doesn’t reflect the way people actually work in projects. So, what good does it make having a “pairing” torture that doesn’t prove anything?

Probation period exists for a reason.

I have been experimenting with Vaadin in one of my petty projects for a few weeks now.

As it happens to any technology, there are good and bad things about it, but so far it’s been a pleasure to develop with it.

Despite having read in a blog post (listed on the Resources section) that Google is now able to interpret Javascript pages with its crawlers, this is what I got:

“You have to enable javascript in your browser to use …” clearly is not the expected result.

In order to solve this problem, you can simply create an HTML page to contain all the information you need the search engine to see and embed the Vaadin app as it is n an iFrame:

Create an the outer .html page

Note that the path here needs to match  the path in the iFrame src of the HTML page above.

Change this in you Spring configuration class.

The result, as expected

Today I had trouble debugging a Rest endpoint in a Spring Boot application.

To start the debugger from the IDE, I simply right-clicked the main method and ran the debugger: 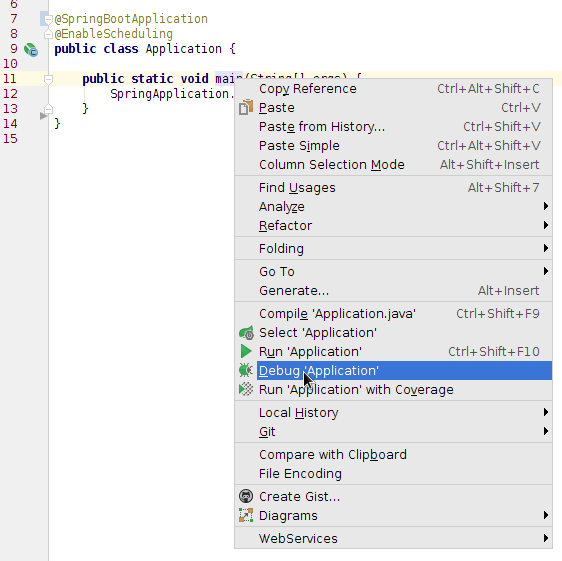 Despite getting all the logs for the scheduled tasks and no error messages, I couldn’t hit the breakpoint in my endpoint method.

Eventually I noticed that Tomcat wasn’t logging its initialisation. Therefore, I was missing this line from the logged messages:

To prepare the application for debugging, run:

The app at this stage will halt execution until the debugger is attached to it:

Add a new remote debugger making sure of using the same port the plugin broadcasts on. 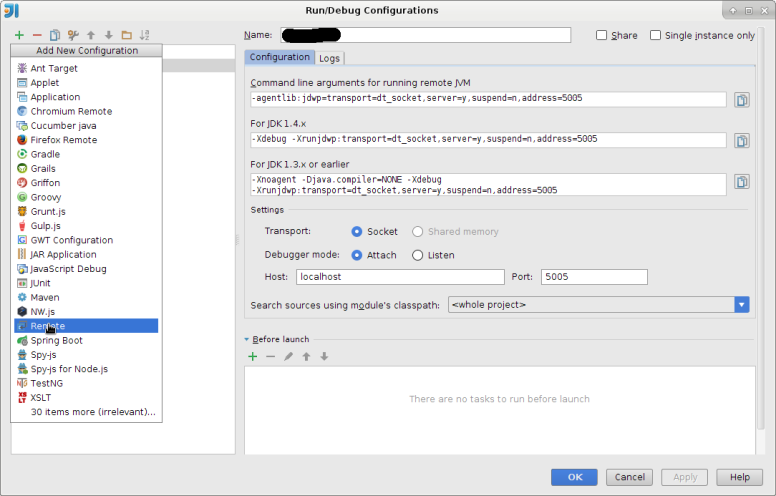 That is it. Now the endpoints are running on debug mode.

I’ve recently started using the Google Analytics Tracker plugin for Vaadin and it’s been working flawlessly, but I ran into a couple of small issues when configuring it for Vaadin 7 that I thought it’d be worth sharing them here.

The main difference between Vaadin 6 and 7 in terms of the basic configuration is highlighted in lines of the code snippets below.

The method extend(UI) is the one that enables the plugin to be added to the page.

If you prefer to use dependency injection, provided by Spring in this example, make sure the instance of the tracker is not a singleton. In Spring, this can be achieved by changing the scope of the bean to prototype:

You’ll know when your bean scope is singleton, if the plugin eventually throws the exception below.
The exception tells us that the singleton tracker cannot be shared by another instance of the UI.

This is an easy way to access the version number of your application version in Java using Spring Boot.